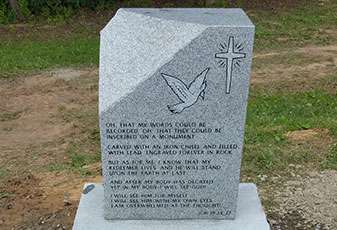 The Prince William County Sheriff’s Office in partnership with Woodbine Baptist Church provided a final resting place for 41 citizens at Woodbine Cemetery in Manassas, Va on Tuesday, June 7. The event provided an honorable burial for residents who passed away and went unclaimed by family members. Chaplain Gene Wells officiated the event, leading the attendees in prayer. Sheriff Glen Hill, Mayor Hal Parrish, and Chaplain Don Belanus expounded on the importance of recognizing deceased residents within our community who do not have family and providing them with a respectful burial.

Virginia law charges local sheriff’s offices with taking custody of deceased unclaimed residents, but it does not say how officials are supposed to dispose of them. Sheriff Glen Hill stated, “I am grateful that Prince William County Sheriff’s Office is able to serve the unclaimed citizens of Prince William County and the cities of Manassas and Manassas Park, and provide a noble funeral for them through our partnerships with community organizations.” In Prince William, the Sheriff’s Office contracts with various crematoriums for cremation, then in partnership with Woodbine Cemetery each unclaimed resident is supplied with a burial plot. Woodbine Cemetery has been gracious in providing space for the deceased unclaimed residents at no cost.