10 Funny Obituaries From Around the World 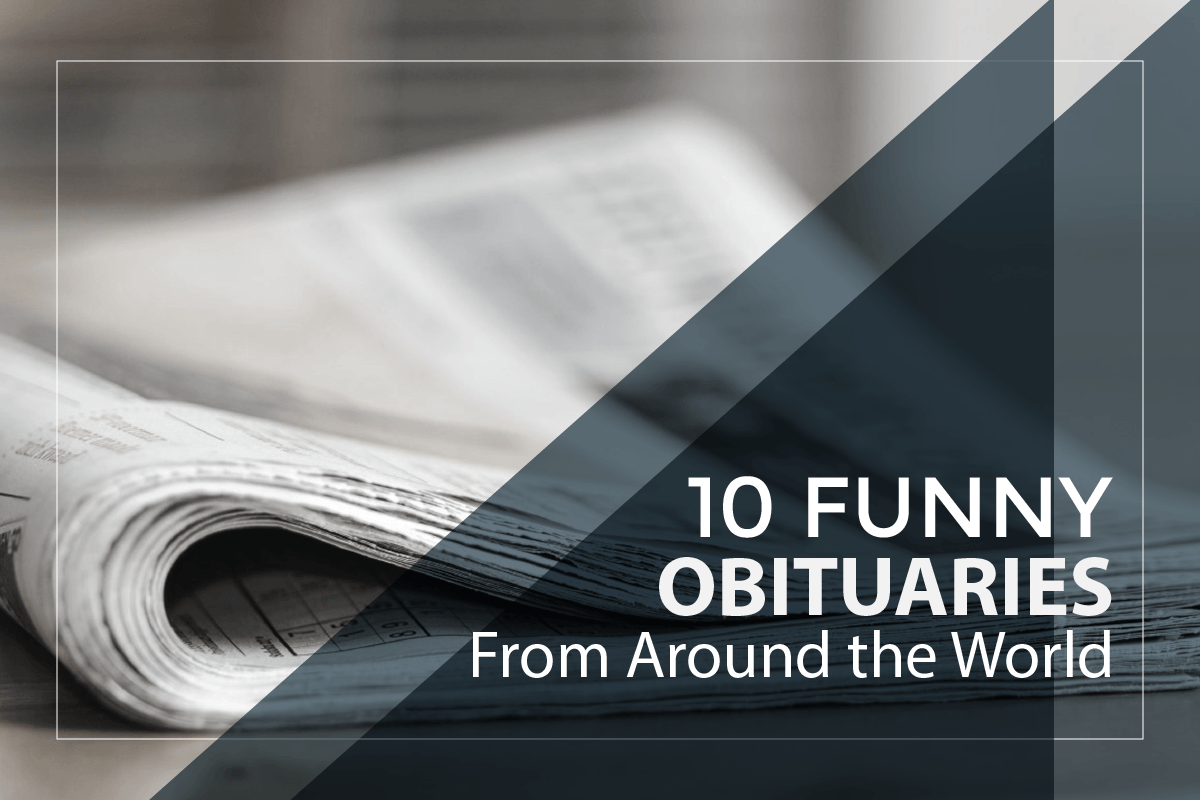 10 Funny Obituaries From Around the World

An obituary is a news article published in the newspaper that informs the public about the
recent passing of a person and the work that they did in their life. Just like you can print
anything you want on custom granite headstones, an obituary too, can cover a wide range of
topics.

Obviously, sharing the news of someone’s death is a sad and emotional thing to do, which is
why most obituaries are extremely sad and tear jerking. But, there are some who like to do
things differently. There are some who want to spread smiles and laughter instead of tears.
And, that is why some people use humor when writing an obituary. Over the years, there have
been some incredibly humorous obituaries printed in the newspapers and below is a collection
of the top ten:

“William Ziegler escaped this mortal realm on Friday, July 29, 2016 at the age of 69. We think he did it on purpose to avoid having to make a decision in the pending presidential election. He leaves behind four children, five grand- children, and the potted meat industry, for which he was an unofficial spokesman until dietary restrictions forced him to eat real food. . .”

“Due to multiple, anonymous Mother’s Day cards which arrived each May, the children suspect there were other siblings but that has never been verified.”

“Richard Norton Bacon (Rick) of Lumberton has left the building. His friends will tell you he’s in a better place. The rest will say they can smell the Bacon burning.”

“We were blessed to learn many valuable lessons from Pink during her 85 years, among them: Never throw away old pantyhose. Use the old ones to tie gutters, child-proof cabinets, tie toilet flappers, or hang Christmas ornaments. Also: If a possum takes up residence in your shed, grab a barbecue brush to coax him out. If he doesn’t leave, brush him for twenty minutes and let him stay. ”

“She liked four letter words as much as she loved her rock garden and trust us she LOVED to weed that garden with us as her helpers, when child labor was legal or so we were told.”

“He despised canned cranberry sauce, wearing shorts, cigarette butts in his driveway, oatmeal, loud-mouth know-it-alls, Tabasco sauce, reality TV shows, and anything to do with the Kardashians.”

“Father, husband, and life of the party, Aaron Joseph Purmort was many things to many people. And if his obituary is to be believed, he was also superhero. . .”

She loved “Wizard of Oz” so much that she had a dialogue added to her obituary; “Ding dong the witch is dead…”

“I don’t want a funeral.  A funeral is a waste of harrrrrrd earned and harrrrrrd saved money that my family can use now.” Sounds like Angus was looking for budget-friendly tombstones for sale.