All You Need to Know About Korean War Memorial 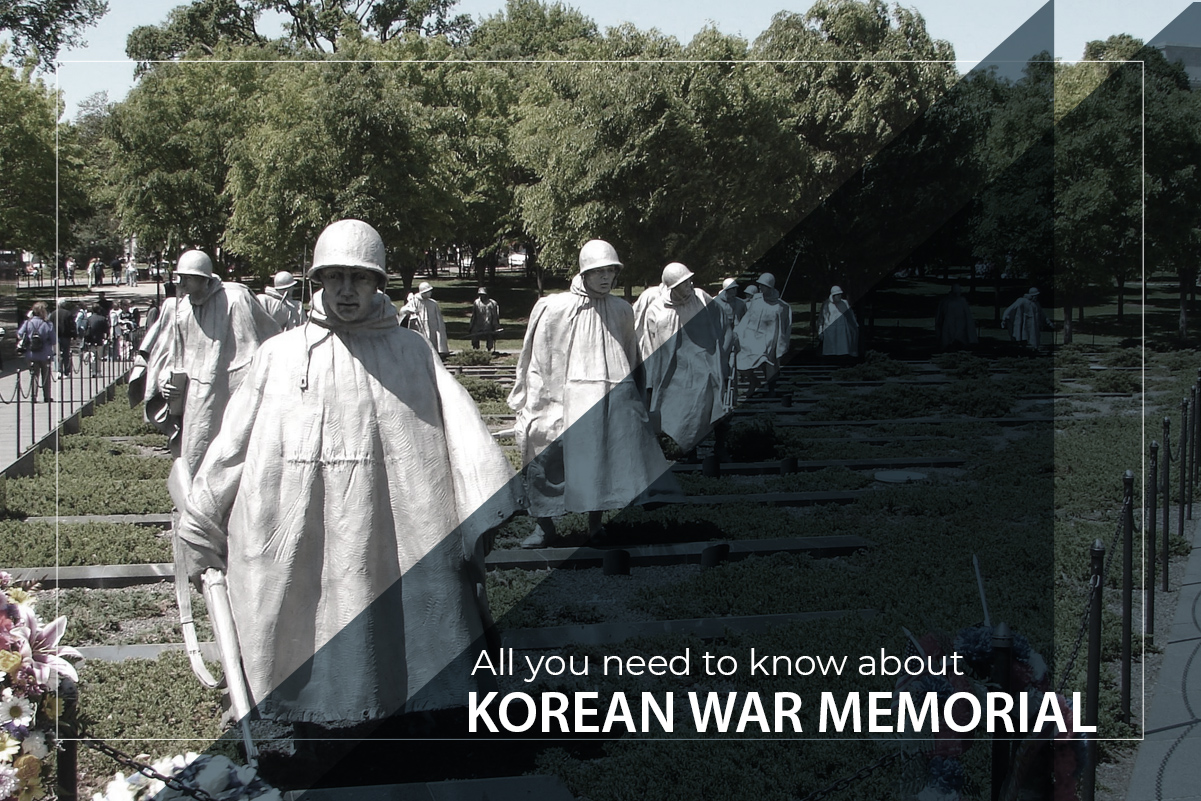 All You Need to Know About Korean War Memorial

History of the Korean War:

The Korean War was a conflict between North Korea and South Area. It started on the 25th of June, 1950 and lasted through an extensive time period of more than 3 years. It ended on the 27th of July, 1953. In the war, North Korea with the support of China and the Soviet Union. While on the other side, South Korea had United States as well as United Nations on their side. The main ignition of war was provided when North Korea invaded South Korea, which was then followed by numerous attacks on both sides of the border.

As a consequence of the Cold War, the United States and the Soviet Union divided Korea into two separate sovereign states in 1948. The makeshift border was set at the 38th parallel in between North and South Korea. The government of the two states had completely different systems. A communist state was established in the North under the leadership of Kim II Sung. While in the South, a capitalist state was established under the government of Syngman Rhee. Both of these leaderships considered theirs as the sole legitimate government of Korea and none of them accepted the border as permanent. This issue transformed into warfare when the North Korean military, under the influence of the Soviet Union and China, advanced through the South Korean border on 25th June, 1950. As a result, the US and the United Nations asked South Korea to repel the forces through aid with the US Military Troops. Through multiple interventions by the United Nations’ Forces and China, the war went on for three years.

Ending of the War:

The fighting finally ended through the signing of the Korean Armistice Agreement. As a result, the Korean Demilitarized Zone (DMZ) was formed which separated North and South Korea. Both were also asked to return the prisoners of war. No peace treaty was signed and technically, both Koreas were still at war since recently, when leaders of both Koreas met at the DMZ in 2018 and agreed to finally end the war.

The Korean War was one of the most destructive conflicts of the recent times. According to an estimate, it has been said that there was a total of almost 3 million fatalities. These critical numbers are higher than the casualties of both World War II and the Vietnam War. Apart from such heavy death tolls, the two sides were both heavily bombed and all of Korea’s major cities were destroyed.

As a result of the war, both North Korea and South Korea were destroyed. South Korea ended up getting a large amount from the United States as allowance in the Vietnam War Era. Their GNP increased five-fold. During 1970-1990, South Korea transitioned into one of the fastest growing economies of the world. South Korea transformed into a totally developed country. North Korea, on the other hand, was involved in heavy bombings at the time of war and was unable to revive their industrialization. Financial aid was given in the shape of technical as well as monetary support by the Soviet Union and later by China as well. Despite all these efforts, North Korea, led by Kim II Sung’s son Kim Jong Un, still remains underdeveloped to this very day.

Millions of people as civilians and troops were brutally dealt with during the war. There were deaths of women, children and the elderly along with mass murders through bombings of complete towns. Prisoners of War were terrorized inhumanely and most of them eventually died. In an infamous incident, about 50,000 – 90,000 South Korean troops starved to death while marching. The funds for food were misused by their officers. The Korean War is remembered to this very day as an extremely sad and unjust conflict.

Establishment of the Korean War Memorial in Washington D.C.

Dedication of the Korean War Memorial:

The Korean Veterans memorial is dedicated to the American war soldiers, who served their country during this particular military conflict on July 27, 1995. It honors the sacrifices of the 5.8 million Americans who served in the U.S. army during the three-year period of Korean War, from 1950 – 1953. Located near the Lincoln Memorial on the National Mall in Washington, D.C, the Korean memorial is very popular among visitors and tourists and often leave thinking it is their most favorite, especially the 19 lifelike statues that makes it unique and stand out. It comprises of 4 components; the statues, a memorial wall, a pool of remembrance and a wall dedicated to the United Nations.

Four Architects from the Pennsylvania State University won the design competition for Korean Memorial Services in 1986. However, these architects withdrew when the advisory board asked for multiple changes. The Korean Memorial project was then handed over to Cooper-Lecky Architects who managed collaboration among several other designers as well. Former President George H.W. Bush inaugurated the groundbreaking ceremony on the US Flag Day on14th June, 1993, after which the construction started. On the 42nd Anniversary of the Armistice that ended the war i.e. on 14th June 1995, the then President of the United States Bill Clinton dedicated a memorial to the men and women who served during the war.

The aerial view of the Korean War Memorial shows a triangle intersecting a circle. Within the walled triangle, there are 19 iconic Stainless-Steel statues present which were designed by Frank Gaylord. Each of these statues is larger than the average human size standing at about 7 feet 6 inches tall with each weighing about 1000 pounds (or 500 kg). Each statue represents a military officer on patrol.

These detailed sculptures of the US armed forces also represent an ethnic cross-section of the American melting pot. If we talk about the symbolism of these statues, it is important because the Korean War was supposed to be the first conflict since the American Revolutionary War where the U.S. military units were not racially segregated. The troops are seen wearing ponchos and juniper bushes and granite slabs covering the ground of the memorial. This was done in an attempt to replicate the difficult elements, such as, the bad weather and rugged terrain, that the veterans had to deal with throughout the war. You will be able to notice that no matter where you are in the memorial, the eyes of at least one of the statues will be looking at you. This basically shows that they are alert to the enemy.

Out of these 19 statues, 14 are made as figures from the US Army, three from the Marine Corps, one is from The US Navy and one is an Air Force Forward Observer. These are dressed in complete combat gear.

Tall walls are made from Academy Black granite. More than 2500 images are sandblasted in the wall which show the land, sea as well as the troops who supported those who fought in the war. These images are of the Korean War veterans taken from photographs and are etched into the walls. These include doctors, nurses, chaplains, engineers, flight and tank crews, and sailors.

As we walk towards the opposite side of the Korean War memorial, there is a formation of troops on the right and a polished reflecting wall on your left. The first thing that can be noticed is that you can see the reflections of the 19 statues in the wall. It was designed this way. This is approximately where the Korean forces stood when the U.S. became involved in the conflict. The demilitarized zone exists till this day.

A Pool of Remembrance:

On the side of the Korean War Memorial D.C., the circle that is being intersected by a triangle is actually a pool. In the south of the Korean Memorial vicinity, multiple bushes of the Rose of Sharon hibiscus plant are present, which is South Korea’s national flower.

It is situated at the front of the formation of troops, a reflecting pool which represents calmness and serenity. Along the side of the pool are inscriptions listing the numbers killed, wounded, missing in action and held as prisoners of war for both the United Nations and the United States. At the wedge formation the following is inscribed:

“Our nation honors her sons and daughters who answered the call to defend a country they never knew and a people they never met.”

A further granite wall contains the message “Freedom Is Not Free”.

The visitors miss a low-lying wall on the left side of the path, as everyone’s eyes are naturally pulled to the group of statues. The wall lists in alphabetical order the names of 22 United Nations Member States, including U.S.A. that contributed to the allied offensive, including troops, medical supplies, material, etc.

It was known at the time as the Korean conflict, it was the first military action for the relatively new organization and a test of its resolve.

It is to be noted that there is no official treaty ending the war, the U.S. did not declare war on North Korea, which is the reason why since 1953, an uneasy truce has been in effect.

Illustration of the Korean Memorial:

Korean Memorial Services gives a tribute to majorly of the troops who were stationed in the Korean battlefields. There is a developed fund that takes care of the Korean War Memorial. The memorial is a perfect illustration for tourists and visitors about the destruction and the aftermath of a war. It contains figures of the death tolls, statues as well as wall engravings that are heartwarming and heart wrenching. The memorial supports complete peace.